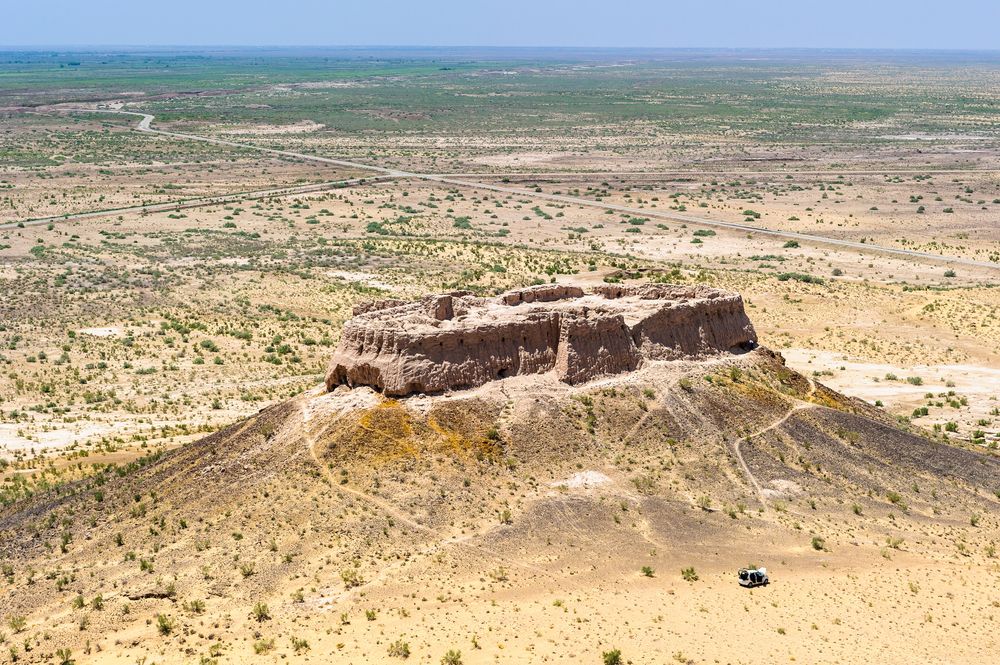 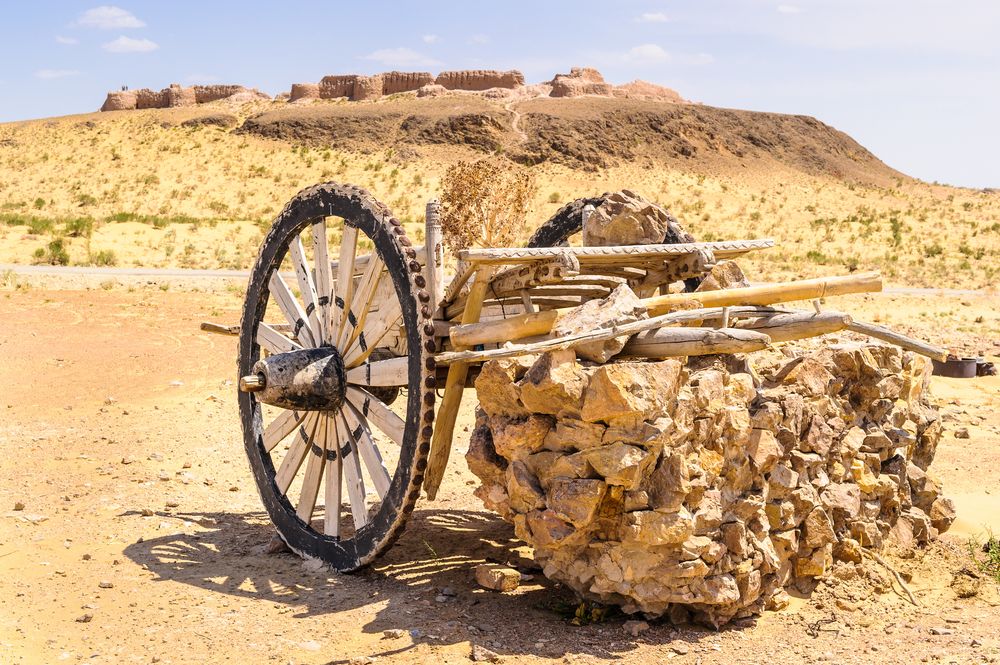 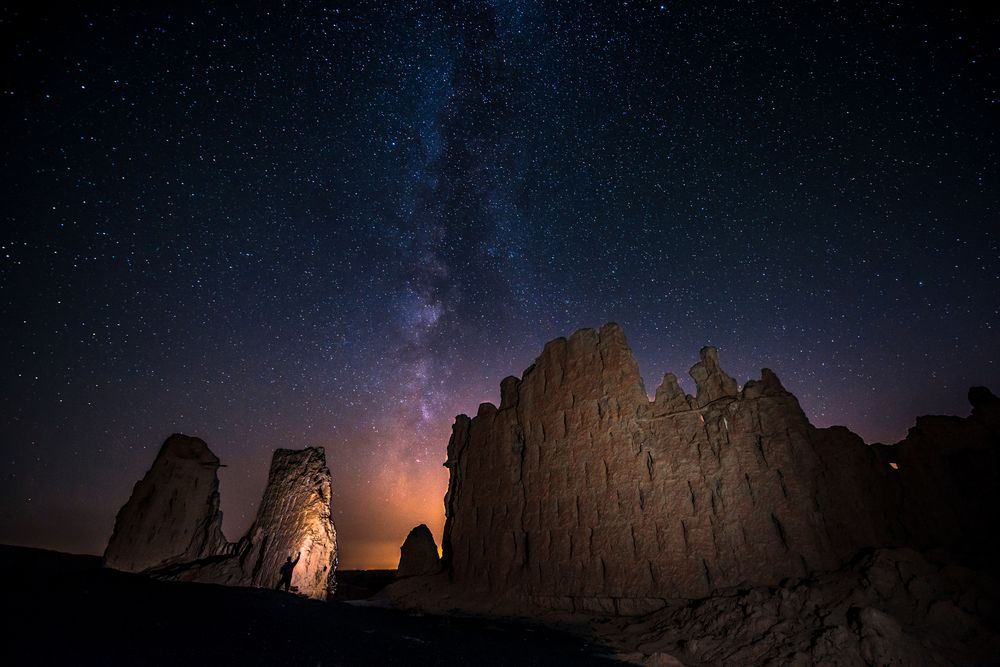 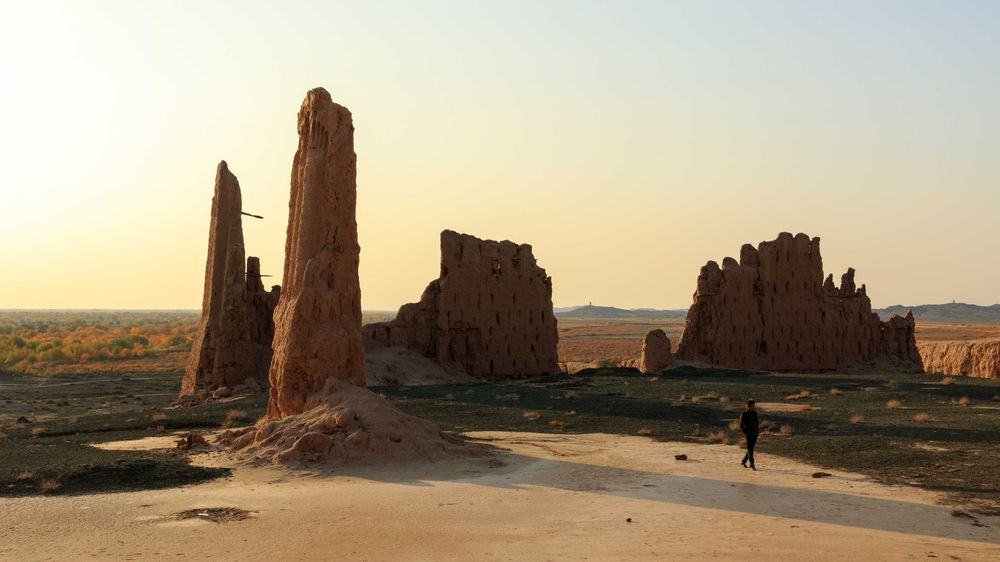 The site is located 6 km south-east of the village of Karatau, in the south-western spurs of the Sultanuizdag Range. This is one of the most spectacular monuments on the right bank of the Amudarya. The site adjoins LABR from the north. The distance from the town of Beruniy is 51 km if you drive on a straight road via the village of Aktau, and 77 km on the main asphalt road.

Janpik-Kala has a complex layout. The remains of the pakhsa (rammed earth) walls of a rectangular citadel can be found in the eastern part of the site. The walls are decorated with closed semi-columns topped with stepped arches. Archaeological excavations made it possible to specify the object’s chronology. The oldest ceramic items excavated there are dated back to the 4th century BCE-1st century AD. The latest artifacts found, coins, are referred to 1319-1320 and 1345-1346, which, probably, means that at about this time the life in the structure declined. In the course of the excavations, researchers found numerous items that came there from different places in Asia and Europe (China, Egypt, Russia, India and others). In the medieval period, the site was a port on the Amudarya. From the archaeological site you can obtain a wonderful view of most of the enormous territory of the biosphere reserve.

The Gyaur-kala site is situated 1.5 km away from the Sultanuizdag Range, in the south-eastern extremity of the Karatau village on the right bank of the Amudarya. The distance from the town of Beruniy is 63 km, from Nukus 81 km. Located at just 80 m from the riverside, it adjoins the northernmost portion of the LABR buffer zone.

The name Gyaur-kala, apparently, originated at the time when the region was occupied by the Arabs, who used to call all non-Muslims geuhir. In time, the word transformed into gyaur. The fortress’s function was, probably, to defend and control important trade routes in the Amudarya area next to the southern border of Khoresm. There is a lot of evidence that in that period Khoresm was a significant junction on the caravan roads that connected India in the east, the Black Sea region in the west and Persia and Mesopotamia in the south-west. The fortress was in use until the decline of the Kushan Empire in the 3rd century AD.

The site has an elongated form stretching from north to south. It was enclosed in fortified walls with two rows of loopholes, a two-story gallery for archers and towers all along the fortification at a distance of 20 m from each other. The northern wall has a complex structure: it runs eastwards for about 20 m, turns southward and goes in that direction for 50 m, and then continues eastwards for another 50 m. The eastern wall is 450 m long, while the remaining portion of the western wall, whose southern end has been destroyed by the Amudarya, stretches along the river bank for 400 m.

The tower is situated 4 km south of the village of Karatau on the Kuyanchik Hill on the right bank of the Amudarya. The present-day height of the structure is 8 m. It is built of mud bricks bonded with clay plaster reinforced with a high proportion of small-size crushed stones. Functionally, it was associated with the settlement on the Janpik-kala archaeological site.

The Sultan Uvays bobo mausoleum is situated at the southern foot of a mountain range officially named after the Sufi Saint Sultan UvaysDag. The mausoleum stands in the centre of a cemetery and is surrounded by large mazars (holy persons’ graves). The mausoleum is located 34 km away from the town of Beruniy and 110 km from Nukus and can be accessed from the main road connecting Nukus and Beruniy.

Sultan Bobo or Sultan Uvays is quite a popular figure in the Islamic world, where he is known under the name of Sultan Uvays al-Karani, while his full name was Amir Saudinna Uvays binal-Karani. He originated from the village of Karan in Yemen, where he was an ordinary herdsman looking after camels. Sultan Uvays was a contemporary of Prophet Muhammad and is considered by some Islamic theologians the founder of Sufism.

According to early Islamic sources, when Uvays al-Karani lived in Yemen he learnt Muhammad’s doctrines and became a devoted Muslim. He was inspired to visit Medina to meet Prophet Muhammad, but his mother who was blind allowed him to do it only on the condition that he would return home immediately after he visited the prophet’s house. At the end of a three-month journey, he arrived in Medina, but Muhammad happened to be away at that time. Sultan Uvayskept his promise and went back to Yemen.

Although Sultan Uvays never met Muhammad in person, the prophet often visited him in his dreams. He used to say: “I can feel the breath of the Merciful, who is coming to me from Yemen”. Shortly before his death in 632 Prophet Muhammad ordered that his closest associates – Omar (who later became the second caliph) and Ali (the husband of the prophet’s daughter Fatima) – should take his cloak and deliver it to Uvays in Yemen.

This made Uvays al-Karani a holy person in the Islamic religion. Although he did not receive special education in this field, he was canonised and is still deeply revered by Muslims. Nevertheless, it is hardly probable that he was buried in the mountains that are bearing his name today.

The ruins of the fortified walls of the city of Kyat can be found in the south-western outskirts of the town of Beruniyy. Kyat is situated 4 km away from the Amudarya and adjoins the LABR buffer zone from the south-east.

The site 44 ha in the area was a quadrangle with a citadel in the south-western corner. The remaining fortification consists of fragments of the western and southern walls and traces of semi-oval towers. The site was provided with four gateways facing the points of the compass. Apart from the walls, the town was protected by a moat 50–60 m wide.

Kyat was one of the most important capital cities in Khoresm in the early medieval period and was located on the caravan route from Khoresm to Transoxiana (Mawarannahr). The city’s long history can be learnt from medieval sources, primarily, works by at-Tabari, Balazuri, al-Istahri, ibn Khaukal and Makdisi. These authors use several different names with reference to the Khoresmian capital: al-Fir, Fil, Khoresm, Kas and Kyat.

Currently, an asphalt road leads directly to the ruins and fruit and ornamental trees grow nearby. A few years ago a monument to al-Beruniyy was erected near the site.